IAE is the UK’s leading manufacturer of livestock handling equipment, equestrian stabling, steel fencing and shelters. Established in 1969, IAE is an independent, family-run organization. It has an annual turnover in excess of £50 million and employs over 500 people.

Over the past 20 years, IAE has grown from being a small, family business to a rapidly-expanding organization with an international reach. Having outgrown their facilities in the town of Leek, UK, IAE entered an era of expansion, culminating in a 36-acre, purpose-built site near Stoke-on-Trent in Staffordshire, England. It was in connection with the company’s growing business that they began to encounter limitations with their IT systems.

“We were accustomed to working with old IT systems, and had been doing so for many years,” relates Jeremy Annable, Business Systems Manager at IAE. “Employees were happy to work with pen and paper, even from engineering. We had an IT manager who created a number of bespoke applications in order to keep costs down, yet we got to a point where these applications were a hindrance, and they would require us to reverse the progress we were making in the business.”

IAE’s current set-up prevented the company from taking advantage of best-practice software. “From a Sales perspective, there were so many questions I couldn’t answer,” comments Jeremy. “I started looking at a CRM system and Salesforce, and I quickly realized we couldn’t get very far with our current IT set-up.” Then, IAE’s main business system, Sage ERP, announced end-of-life for the version IAE used, which would render many of the bespoke programs obsolete. Suddenly the company was in a situation where they not only needed a CRM system, but a complete system overhaul. It was at this tipping point that IAE decided to embark on a wide-scale digitization of the company’s IT infrastructure, which included labeling.

Under IAE’s previous labeling set-up, employees would design labels and send them to the software company that provides their warehouse management system (WMS). The software company would then hardcode the label template into the WMS. This manual approach led to hundreds of label variations. IAE was in a situation where they were changing their labels to fit their existing IT set-up, as opposed to designing labels to fit market and business requirements.

Pawel Rudnik, IAE’s IT Technician, explains the limitations of their previous approach to labeling. “We were trying to consolidate labels and sizes, but this was a costly and time-consuming exercise because we had to rely on an external company to do the changes. There was a lot of back-and-forth. And, because of the new systems we were bringing on-board, we wanted to make a number of changes to our labels. Yet, it wasn’t feasible from a cost perspective with our current labeling set-up.”

Another key driver was the need to change the way IAE produced documentation for work orders (WIP). “Our previous IT manager designed a program that would print off documentation in a certain way,” Pawel explains. “But that had become obsolete because it was based on 32-bit software. It wasn’t compatible with our CAD 3D design software, and that created a lot of issues.” The company was looking for a way to make updating the documentation easier, and to be able to produce the documentation at the same time as the labels.

In need of a best practice approach to labeling

All in all, IAE realized that they needed a to adopt a best-practice approach to labeling. “We used to do things in a way that suited users not having to do things in the correct way,” relates Jeremy. “When we started examining best practice, we had to fundamentally change our processes, which immediately rendered all of the previous systems redundant. Our goal was to find a system that would give us the flexibility to adjust it to our needs.”

IAE wanted a solution that could simplify the production process for users to print WIP documents and the associated labels prior to starting a new work order. The solution should help the user to identify and pick all materials, assemble the product and apply the appropriate labels. IAE worked with NiceLabel’s partner Cloud Printing Solutions Ltd, who introduced them to the NiceLabel team and their Label Cloud solution.

IAE uses Label Cloud to print out their work order’s front page, pick list, technical drawing and all of the labels required for the job. The NiceLabel integration system receives the technical drawing (PDF from AutoCAD) and work order data from the ERP system (Sage 1000) and writes this information to the Label Cloud database. 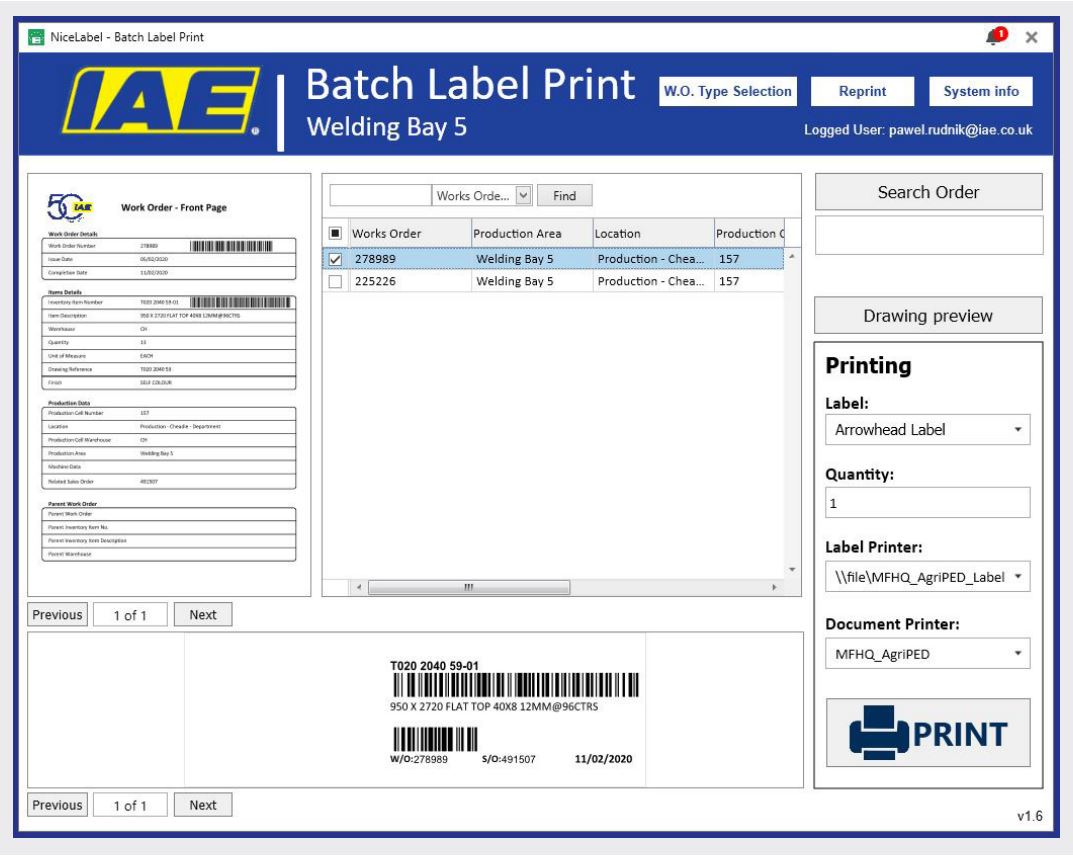 Label Cloud uses the database information to populate the label template and displays a preview of the work order’s front page, pick list and labels. Users also have the option to open or view the PDF document directly in Label Cloud. The label quantity is pre-defined by the work order and the default PDF quantity is one. The user then selects the label (thermal) printer and laser printer and prints to both printers simultaneously with one print action.

When we started examining best practice, we had to fundamentally change our processes. Our goal was to find a system that would give us the flexibility to adjust it to our needs.

With NiceLabel, IAE has been able to move from a home-grown system with manual workarounds to a fully-integrated labeling solution. “Implementing NiceLabel solved a lot of IT problems. We don’t have the security implications we had with the previous system,” comments Jeremy. "As it stood before, we were at a dead-end. Now we’ve got control over the design of the labels, how we do it and which printer we put them to." IAE can also make label changes much faster, since they’re done in-house.

NiceLabel also gives IAE the platform they need to plan for the future. Jeremy explains, “We’ve now got something to grow into. We’ve implemented forward-looking systems that are supported with the necessary controls, and we have all of these systems working together.” Modernizing a company’s entire IT infrastructure is a significant undertaking. According to Jeremy, NiceLabel has done its part to make the process a little bit easier. “NiceLabel’s been one of the things we’ve picked out that allowed us to do all that. It’s like when you’re planning a holiday and there’s the one bit that’s easy and just works; it felt like that with NiceLabel. We thought, "oh great, something that just works on its own."

The fact that IAE was able to get their label management system in the Cloud was a key factor in their system selection process. "We’ve moved quite a few of our systems to the Cloud. The fact that we could have labeling in the Cloud as well gave us a lot more flexibility in terms of integrations and APIs," Daniel Mycock, IT Manager at IAE states. “When you’re integrating with many sources, this is the better way. Maintenance and software updates are just handled. It makes it a lot easier to manage and is more cost-effective.”

Advantage of a best-practice approach

While it can be hard to quantify the benefits of following IT best practices, Jeremy states that, from a business process perspective, the advantages are undeniable. "As a business, we can actually identify where our stock is efficiently and at the right time. We know what processes are taking place, and we can move towards having a meaningful master production schedule. There are massive improvements from a global business management perspective."

IAE has big plans for their labeling operations. One goal is to move label printing from the print room to the shop floor. They also have the option of implementing color label printers, as NiceLabel supports these as well. Jeremy outlines how widespread they expect the NiceLabel platform to be. "We only have about 20 printers at the moment, but I can see that at least doubling when we move NiceLabel into other areas, because everybody should have access to this. Anywhere there’s an activity area and we need to send them some instructions, it usually involves gathering information from Sage, AutoCAD and other places. That’s what NiceLabel does so well; it helps us to gather together the right information and put it in front of people at the right time."

Implementing NiceLabel solved a lot of IT problems. Now we’ve got control over the design of the labels, how we do it and which printer we put them to.

Ready to move your labeling to the cloud?

How Swenco created a more efficient labeling process through integration.